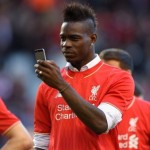 It has been reported that Manchester United great Paul Scholes feels the time is right for Liverpool to sell Mario Balotelli.

The Italian international striker joined the Reds from AC Milan for £16million last summer but he endured a difficult debut campaign at Anfield, scoring just four goals in 27 appearances in all competitions.

There have been suggestions that Balotelli could leave Merseyside in the next transfer window and one person who has backed that notion is Scholes who feels the former Manchester City man has not fitted into Brendan Rodgers’ system.

‘I was one of those who thought that £16m was too good a deal to turn down for an Italy international,’ Scholes wrote in his column for The Independent.

‘It is hard to make that case now. He has had a few injury problems, but most of all it has been the sulking that has been the major issue.

‘He just has not fitted the way that Brendan Rodgers has wanted to play at Liverpool. Rodgers wants hard-working, quick strikers. Balotelli may be quick but there is no way he is hard working.

‘Perhaps next season he might flourish but I don’t think he’ll get a second chance.’ Barcelona Won’t Be my Only Club – Messi