It has been reported that Manchester United legend Sir Alex Ferguson concedes he was wrong to sell Jaap Stam. 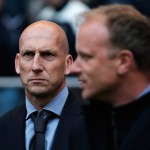 At the age of 29, Ferguson sold Stam to Lazio for £15m and signed 35-year-old French centre-back Laurent Blanc as his replacement.

In his new book entitled ‘Leading’, Fergie admits Stam’s departure was a tough decision to make.

The Scot revealed that he told Stam of his fate while at a petrol station and says it was not an easy conversation for either man.

He wrote: “I felt terrible telling Stam of the decision because I could see he was devastated.

“In retrospect, his sale was premature.”

Jurgen Klinsmann Disappointed By The Sacking Of David Moyes