It has been reported that former Manchester United captain Steve Bruce admits he could’ve been a Chelsea legend! 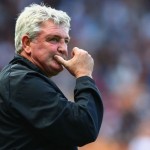 The Hull City boss is regarded among United’s greatest ever captains. But he concedes it could’ve been all so different.

He recalled to manutd.com: “My move from Norwich City in December 1987 followed protracted negotiations, as Mr Chase (the Canaries’ chairman) wanted too much money.

“Tottenham and Chelsea were apparently also in the mix, but once I heard United were interested, that was the only club I wanted to join.” Bruno Gomes On The Verge Of Joining Manchester United