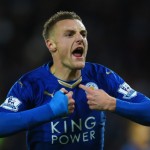 It has been reported that Manchester United legend Ruud van Nistelrooy has paid tribute to Leicester City striker Jamie Vardy.

Vardy wrote his name into the Premier League record books, with the Leicester striker’s opener in the 1-1 draw against Manchester United the 11th consecutive game in which he has found the target.

Van Nistelrooy took to social media to heap praise on the forward for having overtaken him as the League’s new record holder.

The Dutchman posted on Instagram: ‘Well done @vardy7! You’re number one now and you deserved it. #11inarow.’