It has been reported that Manchester United boss Louis van Gaal is preparing to add to his defensive stocks in January. 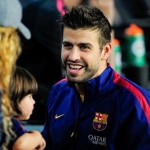 The Daily Star reported that the Dutch tactician is plotting a £20m bid for Barcelona defender Gerard Pique in the hope of luring him back to United.

But he might have to look elsewhere if Pique refuses to leave the Nou Camp, although his options might be limited.

Long-term target and World Cup winner Mats Hummels is not expected to leave Borussia Dortmund until next summer at the earliest.

Van Gaal is a big admirer of fellow Dutchman Ron Vlaar, who starred for Holland at last summer’s World Cup.

But the Aston Villa defender’s agent insists he will not be leaving Villa Park in the next transfer window.