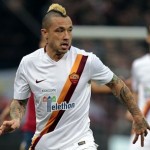 It has been revealed that Manchester United are ready to swoop for AS Roma midfielder Radja Nainggolan.

Reports in Italy suggest that Red Devils boss Louis van Gaal is prepared to part with £26million for the 26-year old Belgian.

Nainggolan, who is co-owned by former club Cagliari, is believed to be weighing up his future at Roma with the likelihood of a sale high as the Italian clubs cannot afford him permanently.