It has been reported that Manchester United are making a major bid for Fiorentina for Juan Cuadrado this week. 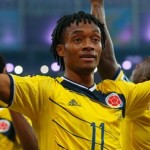 With a deal for former Sporting CP defender Marcos Rojo now wrapped up, the Premier League giant will focus on the Colombia international.

Florence sources say United will offer £32 million today with the view to signing Cuadrado before Saturday.

The wing-back has been managed carefully by Fiorentina since his return from World Cup duty and did not take part in their glamour Warsaw friendly against Real Madrid on the weekend.