It has been reported that Manchester United are making a fresh move for Arsenal captain Thomas Vermaelen. 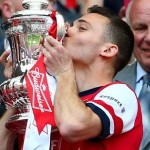 The Mail on Sunday says the Arsenal defender is out of contract at the end of next season and keen to move on to revive his career.

David Moyes was weighing up a move for the Belgium international earlier this year but changed his mind.

Vermaelen has suffered at Arsenal after a dip in form last year allowed Per Mertesacker to establish himself alongside Laurent Koscielny.

The 28-year-old is still club captain at Arsenal but only made 14 league appearances last season for Arsene Wenger’s side.