Reports are out claiming that Roma outcast Ashley Cole is being linked with a free transfer to Manchester United. 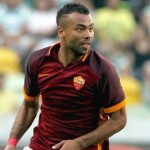 The former Arsenal and Chelsea defender has been told to find a new club by Roma and will be released from his contract if he lands an offer.

The Sun says United boss Louis van Gaal sees the veteran as a stop-gap solution at left-back after losing Luke Shaw for the season with a double leg fracture.

The former England international could do a job for United and also would not present a threat to Shaw once he recovers.