It has been reported that Premier League champions Manchester United are keeping tabs on Real Sociedad winger Antoine Griezmann. 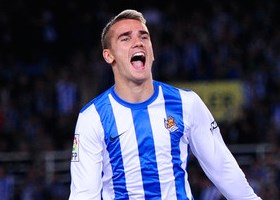 Estadio Deportivo revealed that United will have money to spend in January, with a move for France U21 winger Griezmann on the agenda.

The Frenchman said last week: “I know that some English clubs are looking at me and Manchester United is on that list. It’s nice to hear that but it doesn’t influence my work.”