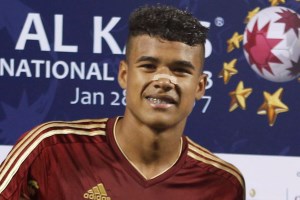 Interesting transfer news are out claiming that Fluminense striker Kenedy is being tracked by Manchester United.

Sambafoot reported that the Premier League champions are lining up a bid for Kenedy in January.

The 17-year-old has also been linked with Real Madrid and AS Monaco after top scoring for his country at the Under-17 South American Championship.