It has been reported that Manchester United are weighing up a move for Stoke City captain Ryan Shawcross. 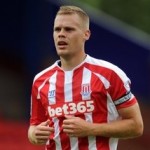 The Daily Star claims that Shawcross becoming the latest name to be linked with a January switch.

The Chester-born centre-back joined the Red Devils in 2002 and progressed through the youth ranks.

He was loaned to Belgian outfit Royal Antwerp in 2007 before making a temporary switch to Stoke later in the year.

Shawcross’ impressive form in the Championship earned him a full-time move to the Potters but ex-United boss Sir Alex Ferguson negotiated a clause giving the club a buy-back clause.