Sensational transfer news are out claiming that Manchester United are planning a record bid for PSG striker Edinson Cavani. 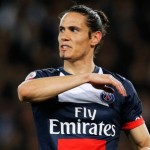 According to the Daily Star, new United manager Louis Van Gaal is aiming to overhaul his squad this summer and has left vice-chairman Ed Woodward in control of securing his top targets, while he fulfils his duties with the Netherlands at the World Cup.

And according to reports, United will launch a record-breaking £56m bid as they attempt to convince PSG to part with Cavani.

Cavani previously insisted his desire to hold talks with the French champions before making a decision on his future, but news of the impending bid from United could convince him to re-think his stance.

PSG broke the transfer record in France last July to bring Cavani to the Parc des Princes from Napoli in a £54m deal.