Interesting transfer news are out claiming that Manchester United are being linked with AC Milan defender Philippe Mexes. 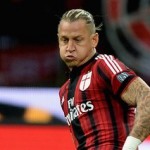 Corriere dello Sport reported that the former French international is on the radar of Manchester United boss Louis van Gaal ahead of the September 1 deadline.

With only a year remaining on his current deal any move for the 32-year-old would be low cost although his wages, some €4million per year, are fairly lofty.