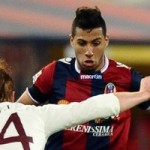 Interesting transfer news are out claiming that the agent of Bologna midfielder Saphir Taider has revealed talks with Manchester United.

The 21 year-old French-born Algeria international has been linked with Inter Milan this summer, but his agent reveals a move to England could be on.

“I have spoken with Manchester United. If they offer €18 million, then what should he be paid?

“He will keep sweating for Bologna, but it is clear he deserves more than the €250,000 he was paid last season.”

Rio Ferdinand Ruled Out For Two Weeks With Knee Injury