Reports are out claiming that Manchester United are being linked with Spartak Moscow attacker Quincy Promes. 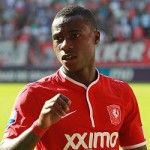 The 22 year-old struck twice in victory over Torpedo Moscow on the weekend, having only joined Spartak in the summer from FC Twente.

“Extracting Promes was our main goal in the transfer period. I’ll tell you, this guy also had an offer from Manchester United in his pocket.

“He has already shown that he has a lot of huge potential. Maybe he’ll grow into one of the leaders of Spartak.”