Reports are out claiming that Manchester United are chasing Torino fullback Matteo Darmian. 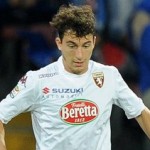 The Sunday Mirror reported that boss Louis van Gaal has had the versatile Darmian extensively scouted and is considering making a January offer.

The Dutchman is desperate to sign a right-back and has long been impressed by the 24-year-old, a two-footed player who can operate in either full-back position.

United are also aware that Barcelona’s Dani Alves is keen for a move to the Premier League and are keeping an eye on him.

But Darmian is seen as a younger option, who would demand lower wages than Brazilian Alves – even though it might take around £15million to prise him from Torino.