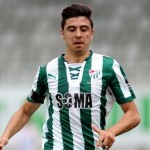 Radospor reports the Turks have asked for a €12million (£8.6million) fee for Manchester United and Liverpool target Turfan.

The 20-year-old is highly-regarded by the Turkish club and scouts of a host of Premier League teams have already travelled over to the Eastern European country to watch him play.

It is believed that both Galatasaray and Fenerbahce are also in the running for the right-back’s signature, but he is expected to be on the move somewhere this summer.