It has been reported that the agent of Borussia Dortmund midfielder Marco Reus has talked up a move away. 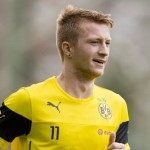 Bild reported that the 25-year-old has rejected a new Dortmund contract.

The German international’s current deal will keep him at Westfalenstadion until 2017, but Liverpool and Manchester United are reportedly interested in taking the midfielder.

And his agent Dirk Hebel has put potential suitors on alert by talking up interest from abroad.

“Marco would make any big European team stronger,” he said.

“That’s why it’s completely normal that a number of these major European teams are interested in signing him.”