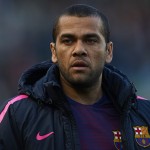 Off contract in June, the Brazilian international is weighing up his next move and has been linked with PSG, along with Manchester United and Liverpool.

Barca may also still offer the fullback new terms, but will insist on the veteran accepting a pay-cut.

Meanwhile, PSG are continuing their talks with Alves’ camp and invited his agent and ex-wife, Dinorah, to their annual charity gala this week, reports Sport.

Dinorah was accompanied at the event by the wife of former PSG and Barca defender Eric Abidal.

Abidal is this week in talks with Barca about a role with the club.