It has been reported that the brother of Bayern Munich winger Xherdan Shaqiri has confirmed the interest of Liverpool and Manchester United. 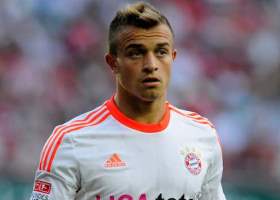 The Switzerland international, says sibling Erin Shaqiri, will assess his options at the end of the season.

Erin told Blick: “We are now waiting for the summer to see what we do.

“But when clubs like Liverpool, Manchester United, Internazionale and other top clubs report to you, then of course we must listen to what they have to offer.”