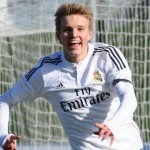 According to reports in Spain, Martin Odegaard’s future at Real Madrid is already in question.

The 16-year old Norwegian whizkid was struggled at Real since joining from Stromsgodset for around £2.3million in January and was recently dropped from Zinedine Zidane’s Castilla team.

It is believed that Odegaard’s father and agent will speak with Real chiefs soon in a bid to discuss the player’s future which has alerted the attention of Manchester United and Liverpool.

The Premier League duo were showing interest in Odegaard late last year prior to his move to the Santiago Bernabeu which has not quite gone to plan.