Reports are out claiming that Liverpool have joined the hunt for Arsenal defender Thomas Vermaelen. 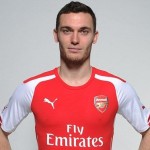 It is said that Liverpool are set to make an attempt to lure Vermaelen from Arsenal.

But the Belgium international centre-half’s head could be turned by reported interest from Barcelona.

Manchester United are also being linked with the Gunners skipper.