Reports are out claiming that Liverpool and Manchester United are chasing Barcelona midfielder Alex Song. 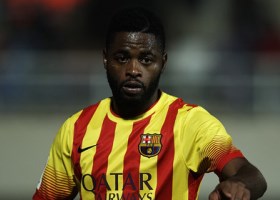 The Mirror reported that the Premier League rivals are keen on £8million rated Cameroon international.

Despite joining for £16m from Arsenal, Song could go for as little as half that amount as his club look to cut their losses.

Speaking in March, the talented defensive midfielder revealed England was always likely to be his destination should he leave Spain this summer.

The 26 year old, who is also a target for former club Arsenal said: “If I leave Barcelona it will be to return to the Premier League.

“I will return to England one day, that’s for sure.” Arsenal Blow As Jack Wilshere Ruled Out For THREE Months