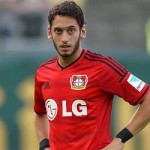 Express reported that Manchester United and Liverpool are scouting the Turkey international, along with Real Madrid and Barcelona.

Calhanoglu only moved to Bayer last summer from Hamburg SV for €10 million.

His agent, Bektas Demirtas, insisted: “Hakan has everything he needs in Leverkusen, is playing in the Champions League, contesting for the German Cup and things are also going well in the Bundesliga.”

Demirtas added there will be no talks with another club. Ryo Miyaichi Out Of Action For Three Weeks With Ankle Injury