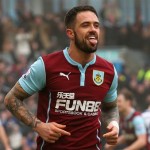 Reports are out claiming that Liverpool remain in the hunt for Burnley striker Danny Ings.

Ings comes off contract in June and will not go down with Burnley this summer.

The Sunday Mirror reported that Ings remains a target for Brendan Rodgers’ Liverpool.

The striker has also been linked with Manchester United and held talks with Real Sociedad earlier this year.

Ings has made it clear he doesn’t want to move to another club just to sit on the bench. Guillermo Varela to be first signing for Moyes