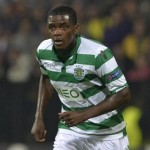 Reports have emerged claiming that Sporting CP midfielder William Carvalho is a top summer target for Liverpool and Manchester United.

It is said that both clubs are in the market for a defensive midfielder and Carvalho fits the bill.

The Mail on Sunday says he has a £35million get-out clause in his contract, though changes to third party ownership could see his price drop by around £10m.

However, the action between the two Premier League giants could mean his value surpasses the £30m mark.

Liverpool see Carvalho as the ideal player to replace the departing Steven Gerrard.

Equally, United have eyes for him to shore up a midfield which has lacked an enforcer this season.

Rooney : Van Persie Will Win The Player Of The Year Award!