Reports are out claiming that Heerenveen midfielder Daley Sinkgraven admits he could leave in January. 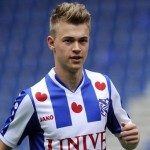 The talented No10 is being linked with Manchester United and Liverpool, while he is a confirmed target for Ajax coach Frank de Boer.

“Can a transfer take place in January? Yes, it can happen, if there is any interest,” the 19-year-old told viasatsport.se.

“I heard about Ajax, but I do not know of any of the other clubs that have been mentioned.”

Sinkgraven’s form has him tipped for an eventual move to a Champions League club in 2015.