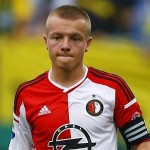 It has been reported that Feyenoord midfielder Jordy Clasie is unsure whether he’ll remain next season.

Clasie has been targeted by Southampton, but is also being linked with Manchester United and Liverpool.

“Who knows,” he said. “I’ve been sitting here now for four years, but I’m not going to just walk away. All of it is quite possible that this was my last game.

“I’m going to report to the Dutch national team and then have a vacation.

“I will then think further about it, but it is obvious that I wonder about another level. I do have ambitions.”