It has been reported that the agent of Borussia Dortmund ace Marco Reus is on the move. 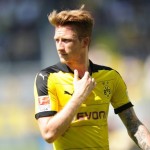 Volker Struth has been spotted in Barcelona, says Don Balon, fueling talk that he is now courting interest for his client from across Europe.

Reus has been linked with Liverpool, where he’d find his former coach Jurgen Klopp, and Manchester United.

At Barca, the Germany international is seen as Andres Iniesta’s successor.

Struth’s presence in Spain is sparking speculation that a move away from Dortmund is now seriously being considered.

PREDICTION TIME : Who Will Win The El Clasico? – Vote Now!