Interesting transfer news are out claiming that Liverpool and Manchester United are set to go head-to-head for Barcelona midfielder Alex Song. 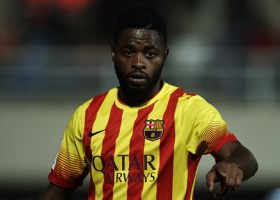 The Daily Star reported that according to sources in Spain, the ex-Arsenal man is CERTAIN to leave the Nou Camp at the end of the season.

Liverpool and United meet on the pitch at Old Trafford tomorrow – but they are poised for a summer showdown off it.

David Moyes knows he has to strengthen his midfield ranks but top-quality players are largely happy at their clubs.

In 26-year-old Song, Moyes has a target that crucially does have experience in the Premier League.

Song’s cousin Rigobert used to ply his trade at Anfield.

Barca are open to letting Song go but they want to recoup the £15m they spent on signing him in 2012.