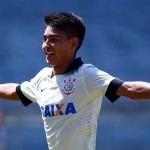 It has been reported that Liverpool and Manchester United are battling for Brazilian teenager Fabricio Oya.

Torcedores.com says the Reds and Man United made proposals for the 16-year-old in the summer which were swiftly rejected by his club, Corinthians.

Oya has been compared to both Neymar and Kaka, and is believed to be one of the most promising young players in Brazil. He has won the Club World Cup at U17 level, scoring in the final.

The two clubs have a fight on their hands to pry Oya from Brazil after he recently signed his first long-term contact with the club.