Reports have emerged claiming that Manchester United have been in talks with Dani Alves this week. 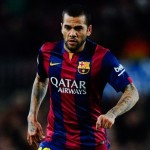 The Barcelona fullback comes off contract in June and can now commit to a pre-contract to a foreign club.

Sport reported that Alves is now in talks with United about a Bosman move.

He is ready to join the ranks at Old Trafford, after it seems his agent is actively talking with bosses at United over the proposed move.

Alves has also been linked with Bosman talks at Arsenal.