It has been reported that Manchester United are locked in talks with Atletico Madrid for Joao Miranda. 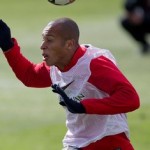 Marca reported that Miranda, 29, has a £24.2m buy-out clause and he wants to leave the La Liga champions.

Barcelona are also interested but neither they or United have offered him reassurances they are willing to pay his buy-out clause.

Atletico are desperate to keep their star defender and they aren’t willing to sell him for less than the full £24.2m fee.