Reports are out claiming that Manchester United have opened talks with Barcelona for Alexis Sanchez. 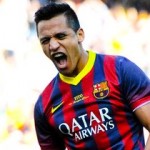 The Daily Star Sunday reported that the Premier League giants are locked in discussions with Barcelona over a £20m deal for the Chile international.

It is said that Liverpool have also tabled an offer for Sanchez, who has been told he is free to leave the Camp Nou this summer by new Barcelona manager Luis Enrique.

Last week Italian giants Juventus had an £18m bid for Sanchez turned down, with Barcelona seeking at least £20m for the 25-year-old. Wayne Rooney Admits England Could Have Done Better Against Norway