It has been reported that Manchester United have reportedly made an initial bid for Sergio Ramos. 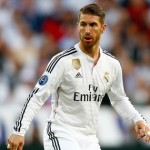 According to the Daily Mail, the Red Devils have lodged an opening offer of £35million with Real Madrid for the Spanish defender.

It is believed that Ramos met with Real officials earlier on Wednesday and instead of sorting a new and improved contract to remain at the Santiago Bernabeu, he requested a move to Old Trafford.

The bid from United does not take into account any potential dealings regarding David De Gea who they want separate from these negotiations.

To add further fuel to the fire, Pedro Riesco, who works with Ramos’ brother and agent Rene, suggested the 29-year old could be on his way out this summer.

“With everything that has happened it will be very difficult for Sergio Ramos to stay at Madrid,” Riesco told Radio Marca.

“Sergio is a symbol of this club. He has nothing to prove. But so many things are being said about him.
‘”There is so much manipulation to discredit his name via spokesmen who behave like puppets saying he is not respecting the club and that he is just a money-grabber.”