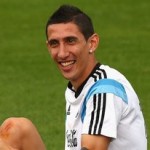 The Daily Mail reported that the Premier League giants have interest in the Argentine international but face competition from Paris Saint-Germain.

The former Benfica star was injured during the 2014 World Cup quarter-final win against Belgium but made a return to light training on Thursday and could yet feature in the final on Sunday.

The winger has been linked with a move to Monaco in the past but stayed at the Bernabeu to help them win the Champions League at the personal request of former United favourite Cristiano Ronaldo.