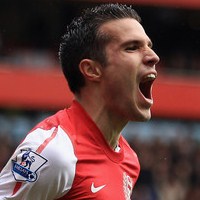 With barely a year to run on his contract, Van Persie is tipped to quit the Gunners this summer, particularly if they fail to qualify for next season’s Champions League.

Manchester City have been regarded as favourites for the Dutch ace.

But talkSPORT reports United have already sounded out the possibility of van Persie making a switch to Old Trafford, and are prepared to splash out big on the former Feyenoord man.