It has been reported that the boards of Manchester City and Manchester United believe Neymar and Lionel Messi can be tempted away from Barcelona next year. 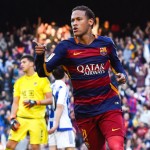 The Sun reported that United could pull off a stunning £350m raid for Lionel Messi and Neymar at season’s end.

But fierce rivals City want them both too – and Luis Suarez could also be available.

It’s claimed the La Liga giants are struggling with cash as they try to convince their biggest assets to stay in Spain.

The current wage bill is already at an unsustainable 73 per cent of revenue.

Man City Striker Sergio Aguero : The Best Is Yet To Come! Man City Deal For Sterling To Go Beyond £100 Million Barrier