It has been reported that the agent of Dinamo Zagreb winger Marko Pjaca has revealed the interest of both Manchester giants. 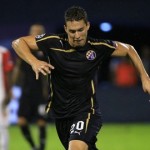 Marko Naletilic admits Manchester United and Manchester City are in contact for the youngster.

He told FCInterNews: “It all depends on how much they could get in the next transfer window, but the club could also wait until after the European Championships, as Pjaca is in contention for the national team.

“There are a lot of top European clubs after him, there’s Bayern Munich, Borussia Dortmund as well as [Manchester] City and United in England.

“In Italy, as well as Inter’s interest there’s also Milan, which has been known about for a long time.