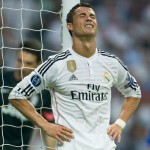 It has been revealed that Premier League giants are monitoring Cristiano Ronaldo’s situation at Real Madrid.

Don Balón claims that Carlo Ancelotti’s exit, the cooling of relations between Ronaldo and president Florentino Perez, the hiring of Rafa Benitez and Perez’s unrelenting support for Gareth Bale have combined to unsettle the former Manchester United star.

This all ties into an annoyance that super-agent Jorge Mendes is supposed to have with Florentino after he chose to hire Benitez rather than Mendes’ first choice (and client, of course) Nuno – currently in charge at Valencia.

Were Ronaldo to leave the Bernabeu, Paris Saint-Germain would be the frontrunners for his signature.

However, United, Manchester City and Chelsea will also be watching developments closely this summer.