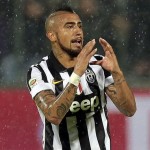 Reports are out claiming that Manchester United and Manchester City are convinced Juventus are ready to sell Arturo Vidal this summer.

Calciomercato.com says Vidal’s time in Turin is coming to an end.

His poor form and injury problems mean Juventus are now considering letting him leave for a fee well below the £40m asked last summer.

The Chilean could now go for £14m.