Reports are out claiming that Manchester United and Manchester City are eyeing Barcelona midfielder Ivan Rakitic. 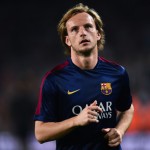 The 26 year old Croatia international only left Sevilla in the summer for the Nou Camp.

The Daily Express says despite having made 20 appearances in all competitions for Barcelona, fans and pundits alike are questioning whether Rakitic has the correct attributes to fit in with the club’s philosophies.

The 26-year-old is also unhappy at playing second-fiddle to veteran Xavi, and reports today claim that the midfielder is keen to move to England in the January transfer window.

United tried to land Rakitic before the player joined Barcelona, and with Louis van Gaal still reeling from the news that Roma will not part ways with Kevin Strootman, a £20m bid from Old Trafford is on the table.

However, the Red Devils will be matched all the way by rivals City, with Manuel Pellegrini keen to bring in a swift replacement for Frank Lampard, whose loan deal expires in the new year.