Reports have emerged claiming that Feyenoord teen Tahith Chong remains on the wanted lists of Manchester United and Manchester City. 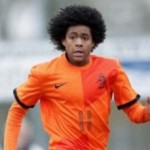 Feyenoord management are desperate to resist pressure from United and City to allow Chong to leave for England.

He impressed English scouts while playing for the Dutch side at the Premier Cup tournament which was held at United’s Carrington training complex last month.

Chong, who can also play as a striker, has represented his country at Under 16 level and is tipped to be one of the next big stars to emerge from Feyenoord’s highly-productive youth academy.