It has been revealed that Barcelona captain Andres Iniesta’s future at the Nou Camp is in doubt. 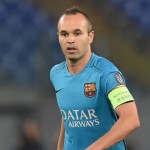 In news which is sure to alert Europe’s biggest clubs, Don Balon says Barca coach Luis Enrique is keen to water down Iniesta’s role going into 2016.

Wih Arda Turan available and Sergi Roberto’s emergence, Enrique sees the midfield pair as the future of Barca and as a consequence, Iniesta is facing time on the bench.

Iniesta has stated he wants to play out his career with Barca, but it’s suggested he will seek a move abroad rather than spend the final stage of his career on the Barca bench.

Clubs across Europe will be queuing to take Iniesta off Barca’s hands, with Manchester City an early favourite thanks to Ferran Soriano and Txiki Begiristain’s connections to Barca.

Chelsea, Manchester United and PSG will also be keen, despite Iniesta turning 32 years of age this season. Beckham has Trials with Chelsea!