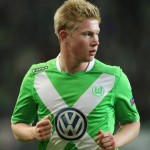 Reports are out claiming that Kevin de Bruyne has refused to rule out leaving VfL Wolfsburg in the summer.

The Belgium international winger only joined Wolfsburg in the summer from Chelsea and has been followed by Manchester City and Manchester United this season.

It’s mooted Wolfsburg would be willing to sell if an offer in the region of €30 million landed on their table.

“I’m not saying if I stay or I will leave this summer. In football, it would not be very smart to say anything with certainty,” said De Bruyne.

“There are many players who embrace the club and say, ‘I’ll stay’, and then they leave.”

He continued: “Right now, I feel good in Wolfsburg, all is well. I can really think about a contract extension. But VfL has a different standard than a club like FC Bayern, for sure.

“My ambition is to play for a top European club and win as many titles as possible.”