Reports are out claiming that AS Roma defender Mehdi Benatia is considering his future. 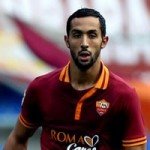 It is said that Premier League giants Manchester City and Manchester United have been linked with the Morocco international.

“I had spoken to the club executives regarding an improved contract but they weren’t interested and I don’t think it will be successful,” Benatia said as reported in Gazzetta dello Sport.

“The offers? My agent is dealing with those but we are talking about it and we will know a little bit more in the near future.”

He added: “I’m happy at Roma but at 27 I need to reflect regarding the big offers of clubs that any player dreams of: Barcelona, Bayern, Manchester City.”