It has been reported that Sofiane Feghouli is stalling on new contract talks with Valencia. 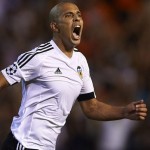 Super Deporte says Valencia directors have this week attempted to initiate negotiations over a new deal.

However, Feghouli, whose current deal expires in June, insists he won’t consider any new agreement until March.

City midfielder Yaya Toure recently stated: “I like as a player Feghouli. He is a super player with a very good mentality. Tomorrow he may be the great African footballer.

“I have heard that he is in his last year of contract with Valencia CF. Now it will be interesting to see how he makes the next step in his career.

“In any case, he’s a player with the skills to succeed in a major European club.”

I Will Play Against Bayern Munich – Rooney