Reports are out claiming that Feyenoord defender Terence Kongolo is at the centre of an intense Premier League transfer battle. 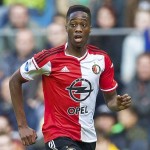 Kongolo is regarded among the best young defenders on the continent and is a member of Guus Hidink’s Holland squad.

Manchester United, Manchester City and Southampton are chasing Kongolo for the summer market.

Saints boss Ronald Koeman brought through Kongolo while in charge of Feyenoord, while United manager Louis van Gaal took him to the World Cup.

However, City hold a trump card, with kid brother Rodney Kongolo a member of their youth team.

FC Dordrecht chief Marco Boogers recently said of Kongolo: “I think that’s a really brilliant player. He is a winner. I enjoy this boy.”