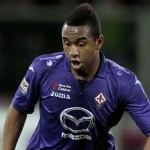 It has been reported that Manchester United midfielder Anderson has rejected a loan move to Flamengo.

The Brazilian midfielder has been told to leave United by manager Louis van Gaal after crunch talks on the weekend.

But it won’t be to Flamengo according to Fox Sports Brasil.

They say he has turned down an offer from the club as he feared he would not get paid when it’s due.

Ronaldinho Linked With A Move To LA Galaxy

Ronaldinho Wants To Play For Flamengo